​Do you know what the bell in our tower looks like? 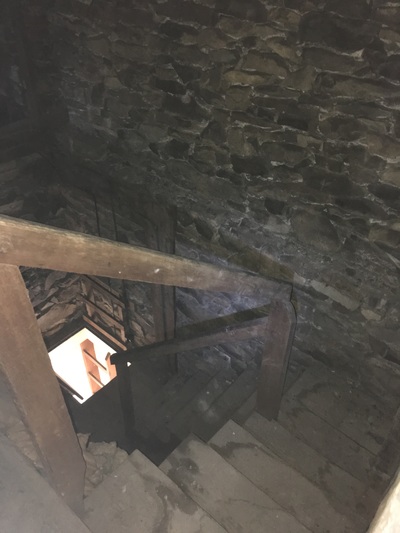 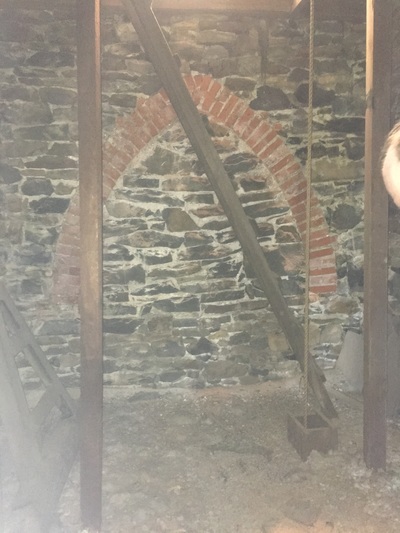 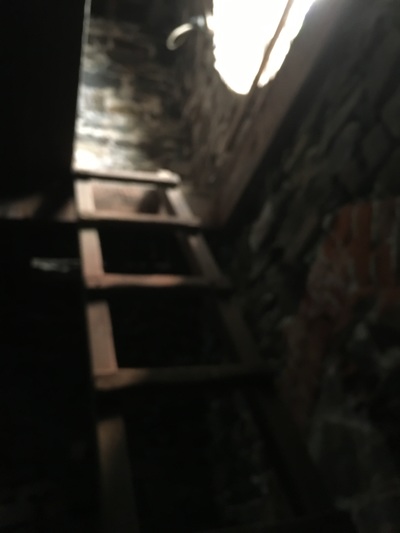 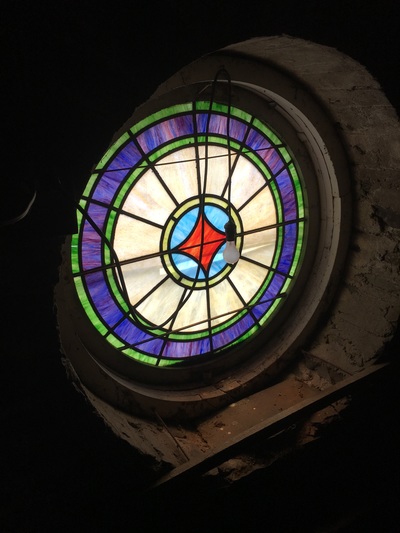 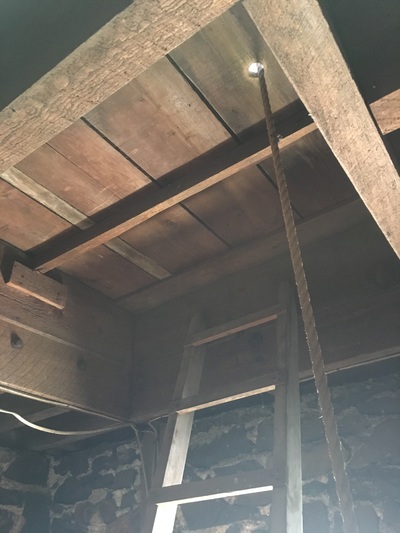 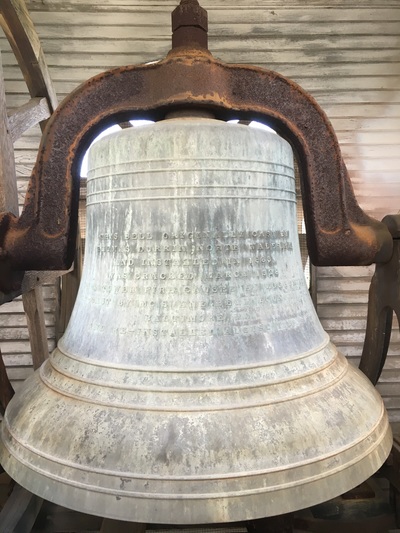 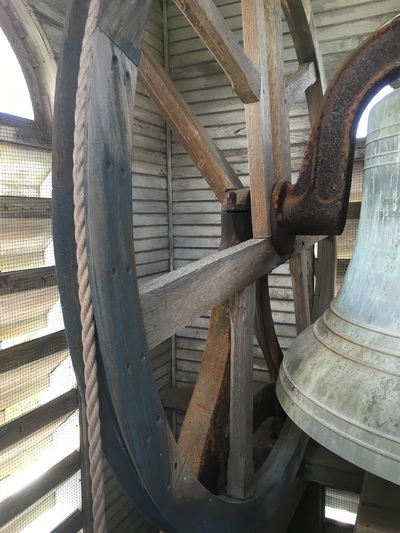 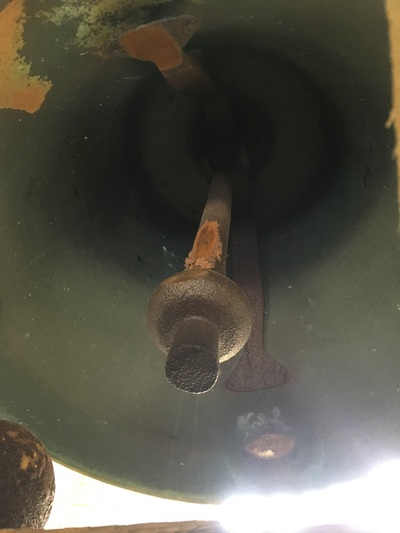 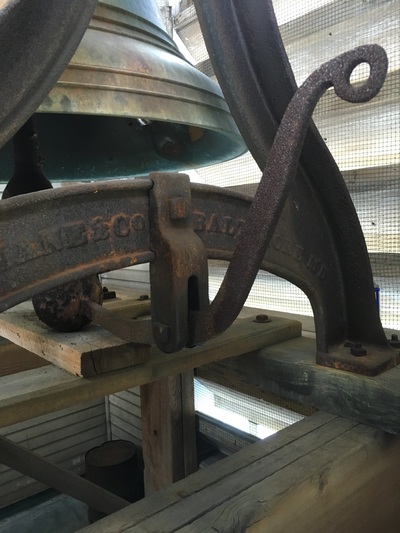 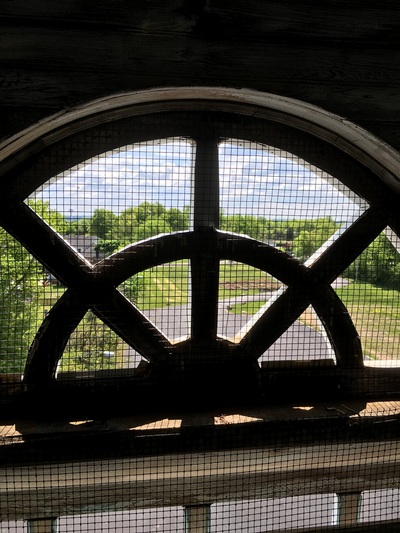 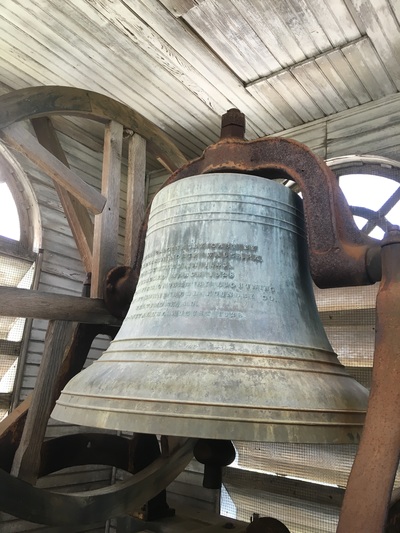 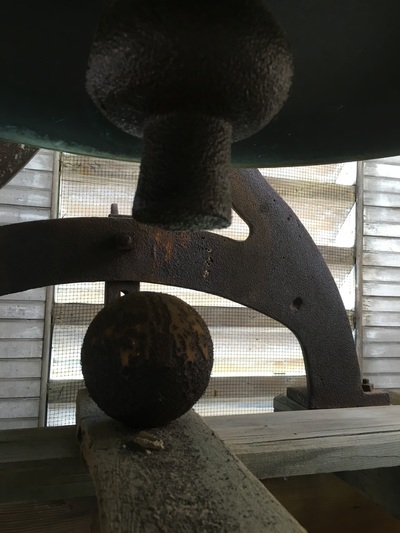 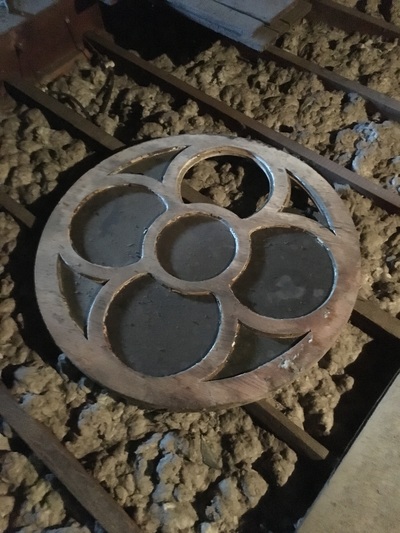 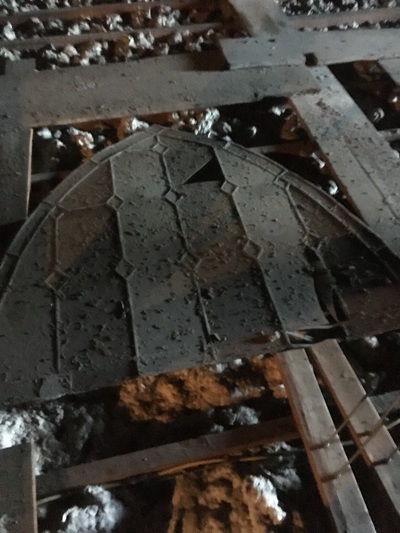 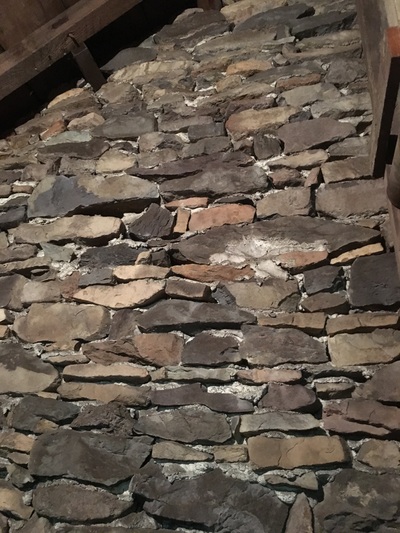 Early history of the “Ridge Road” or “Schlichtersville” Church, now known as Jerusalem Evangelical Lutheran Church, is sketchy due to lack of records.  However, one thing is for certain: the first church edifice was built in 1826.

Researching through old wills and land records, it was found that Enos Schlichter, Sr. donated the land for the church, while George Getman donated the land for the cemetery.  As one walks through the oldest section of the cemetery, there are numerous fieldstones with possible Indian markings, leading us to believe that around the middle of the 18th century, the area was an Indian village.  The oldest legible tombstone (German) dates back to 1764, proof that in this community, some form of religious service was held during the mid 1700s.

Three religious denominations, Lutheran, Reformed, and Mennonite, served the community in the early years.  Before any type of building was in place, up until the year 1800, services were said held in the summer months under the “big white oak tree” and at private dwellings during the winter.

According to the History of Bucks County, a schoolhouse was built around 1800, adjacent to where the church now stands.  Since the first free public schools in Pennsylvania did not begin until 1834, churches conducted both worship and educational services.  Sources say Mrs. Catharine Watts (b. 10-3-1796, d. 2-15-1900) of Rockhill Township recalled attending Sunday school and week-day school in the log schoolhouse.

Prior to the building of the schoolhouse, tradition has it that, Henry Melchior Muhlenberg occasionally conducted preaching services under the old oak tree, while traveling Ridge Road to and from Trappe.  Around the time the schoolhouse was constructed, Rev. John George Roeller, living in Tylersport and pastor of Old Goshenhoppen, Indianfield and Tohickon congregations, probably was the first Lutheran pastor at Jerusalem.  Rev. Jacob Senn was the first pastor of the Reformed congregation, until his death in 1818, at which time Rev. John Andrew Strassburger succeeded him.  Very few records were found about the Mennonite congregations, however, Preacher John Allebach supposedly conducted services on a regular basis.

Some time around 1825 or 1826, with the three religious denominations growing in numbers, the need for a building as a place of worship became more prevalent.  Henry Boetel, considered one of the most influential persons of the community, began to urge the congregations to consider constructing the first union church.  Boetel convinced the people to contribute liberally, upon which a meeting was held to consider the matter.  After due deliberation, a favorable decision was reached.

John Nase (Lutheran), Abraham Trumbore (Reformed), and John Kinsey (Mennonite) were appointed as the building committee.  Peter Ott and John Zellner were engaged as master masons with John Nase and Conrad Wetzell as master carpenters.  The first church edifice was constructed of stone, 36 by 44 feet, with galleries on three sides of the audience chamber, at a cost of about $1,800.  The cornerstone was laid on Ascension Day in 1826.  The dedication service, in all likelihood, was held at Christmas, that same year.

Rev. William B. Kemmerer, pastor of the Richlandtown and Hilltown parishes, was the first Lutheran pastor in the new church building in Schlichtersville, serving the congregation for nearly 33 years.  In 1859, with Rev. Kemmerer’s health beginning to fail, Rev. Ferdinand Berkemeyer was introduced as his successor.

During Rev. Berkemeyer’s pastorate from 1859 to 1885, the Lutheran congregation adopted its first constitution in 1872.  In 1881, the original church building was reconstructed.  The building committee consisted of Jacob Schlichter (Reformed) and Jonas Nase (Lutheran).  The cornerstone was laid on Whitsunday (Pentecost), June 5, 1881, and dedication services held October 23, 1882.  It was built of stone, 36 by 54 feet, with an extension in the rear for Sunday school purposes.  A beautiful tower and spire also were constructed.  Excluding old materials and labor, the structure cost no less than $4,000.  In 1883, a bell was purchased and installed, completing the construction  of the building.  In 1885, with the Mennonite congregation dwindling  in size, Rev. Berkemeyer secured a release from the Mennonite Bishop, making the Ridge Road Church a      Lutheran and Reformed Union Church.Rev. Adolph F. Walz served for one year until 1886, followed by Rev. P.P. Wisser who served until his death in 1891.  Rev. Dr. J.H. Waidelich became his successor in August of 1891.  During his eight-year pastorate, the congregation became chartered; the new cemetery was laid out; and, Trinity Lutheran Church of Perkasie was organized.  In 1898 the congregation agreed to form a parish with Trinity.  In November of 1899, Rev. Preston A. Laury became the first full-time pastor for the newly formed parish.

Under Rev. Laury’s    pastorate, the congregation strengthened and increased in number.  Communion services were changed to four times a year and the clerical robe was introduced.  During the summer of 1903, the church edifice was painted, inside and out, and the pews re-varnished.  The interior was newly frescoed throughout; new carpets were installed; the old windows were replaced with beautiful stained glass ones; and, the elevation of the choir loft was removed.  Dedication services were held on September 27, 1903.

In May of 1907, the Trinity congregation was growing in size and requested to become a parish by itself.  By the following month, the Perkasie parish had been dissolved.  Rev. Laury continued as a supply pastor until accepting a call to Waterloo Seminary in Canada in October of 1914.

Supply pastors continued to serve Jerusalem’s congregation.  During the same time, St. John’s Lutheran of Ridge Valley also was without a regular pastor.  In October 1915, the Norristown Conference recommended the two congregations form a parish, and call a regular pastor to serve both.  By July 1916, the congregations had agreed to the recommendation of the conference, calling the union the “Ridge Parish”.  In March of 1917, they elected Rev. Elmer S. Kidd as the full-time pastor of both congregations.

During Rev. Elmer Kidd’s service at Almont, electricity to the church was established by connecting with Grand View Hospital.  The Ridge Parish purchased a lot for the construction of a parsonage on Lawn Avenue and the location of the choir, formerly at a balcony above the entrance, was changed to a position near the pulpit. Also, the 100th Anniversary of Jerusalem Church of Almont was celebrated on October 10-17, 1926.

On March 29, 1928, at 7:05 pm, lightning struck the church steeple, causing major damage to the building and destruction of the landmark steeple.  During the nine months of repairs, the church was reconstructed with a new steeple, an updated pulpit area and cement walkways.  Also, lightning rods were installed and Sunday school rooms on each side of the building were added.

In January of 1930, Rev. Kidd submitted his resignation.  By May of the same year, Rev. Edwin Andrews began his 13-year pastorate.  During that time, a new pipe organ was installed at a cost of $3,200.  Rev. Andrews was called to enter the chaplaincy of the Navy in 1943.  Rev. Ellsworth Grove then became the pastor of the Ridge Parish from 1943 to 1962.

In December 1946, a set of 25 Mass Cathedral Chimes were given in memory of "Mabel Bauerle” by William Bauerle.  With the return of the servicemen after the war, the manpower of Jerusalem was organized so that many repairs and renovations could be made.  Under the leadership of Mr. Walter Bardsley, president of Lutheran Council, and Mr. Samuel Wenhold, president of the Joint Church Council, along with Mr. Harold Long as manager of the gratis labor, things began to take shape.  Working many evenings, with 15 to 26 men each time, new storm windows were installed, the basement was dug out then concreted, a large coal bin was constructed and a sump pump was installed.  In addition, numerous truckloads of fill were spread over the parking area.  The interior of the church and Sunday school rooms were refinished entirely – walls were painted, woodwork was refinished, and floors were sanded, stained and varnished.  The old pews had many layers of paint removed, and were beautifully finished in the natural wood.  The exterior of the church was re-plastered and painted.  A rededication service was held on October 12, 1947.

In 1958, Jerusalem Lutheran decided to help launch the Telford Home.  Over a 2-½ year drive for funds, the sum of $13,614.50 was collected.  Joseph Helfrich became the first resident from the congregation at the home.  In 1959, the congregation said farewell to Ruth Bardsley as organist and William Bauerle as choir director, both retiring after many years of service.  Ernest Bardsley resigned in 1965 after 33 years as church treasurer.

In 1962, Rev. Grove submitted his resignation.  At that time, it was decided to terminate the union of the Ridge Parish with Ridge Valley Church and go on our own.

Rev. Robert A. Meschke was installed as pastor in 1963.  The parsonage on Lawn Avenue in Sellersville was sold and another purchased on Ridge Road, near Naceville.  Bruce Walt became full-time organist, and to this day, faithfully serves the congregation.  The new Service Book and Hymnal was purchased and introduced in 1964.  The equity was established on the church building in 1966, giving a foundation for negotiations for the Reformed and Lutheran congregations to go their separate ways, if they so desired.

Rev. Stephen F. Blank served the congregation from 1967-1970.  During that time, a trailer was purchased and located in the church parking lot for the purpose of Sunday school rooms.  An addition also was constructed on the back of the church for an indoor toilet facility.

Rev. Richard A. Mowery served the congregation from 1971-1980.  Lloyd Hazlet was installed as choir director in December of 1975, and presently continues to lead the choir.  The church celebrated its 150th Anniversary in 1976.  1977 marked the beginning of discussions for the construction of a multi-purpose building or Annex.

Rev. Richard G. Lorenz served the congregation from 1981-1983.  During his ministry, the Lutheran Book of Worship was purchased and put into service.

In 1984, Seminary Student, Larry T. Wetzel, was called to serve the congregation, and was installed and ordained on April 8th.  During his 13 years of service, many changes took place.  An Annex was built onto the side of the church with a fellowship hall, Sunday school rooms, a full kitchen facility, and bathrooms.  The trailer, which had been used for Sunday school rooms, was removed.  And, after many years of negotiation, the union between the Lutheran and Reformed congregations was dissolved, with the majority of the Reformed congregation merging with St. Peter’s Tohickon UCC.

In 1997, Rev. Wetzel tendered his resignation.  Pastor Susan Lang became the Interim Pastor, until a full-time pastor could be found.  During Pastor Lang’s year of service, the first annual “Live Nativity Scene” took place at the church, and the parsonage on Ridge Road was sold.

Rev. David M. Benninghove was installed in November 1998. Since the beginning of Rev. Benninghove’s pastorate, many renovations and changes have taken place.  “With One Voice” Hymnals were put into service and major repairs to the pipe organ were begun.  In September of 1999, a special mortgage burning service for the Annex took place.  The exterior soffit work was replaced, including aluminum casing around the woodwork of the bell tower.  The driveway was restructured, including a new entrance, and a new sign was erected on Ridge Road.  A central air conditioning unit was installed in the Annex; and, the original entrance doors to the Sanctuary were replaced with modern ones.